The historical tour begins in this section of the museum’s permanent exhibition: Archaeological finds bear witness to settlement of the area that was later called West Prussia as early as the Neolithic Age. In the early Middle Ages, the region was populated with tribes of the Old Prussians, who farmed, hunted and fished, and maintained a flourishing trade with Northern and Central Europe. 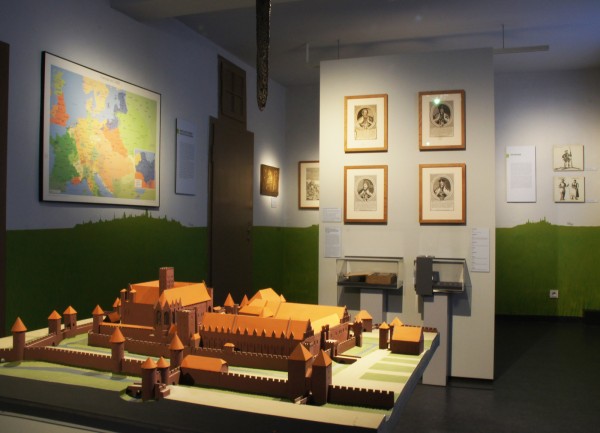 The Teutonic Order, which subjugated and Christianised the Old Prussians from 1231, established an independent territory in the region and left a lasting impression on the land: new villages and towns were created, an administrative system was established, and agriculture was actively encouraged. In addition, secular and religious brick Gothic buildings, that are now considered typical of the area, emerged across the land – represented in the exhibition by a large model of Marienburg (Castle of the Teutonic Order in Malbork) and the St. Mary’s Church, Gdańsk. Later centuries looked back with great interest – and clearly also from a very different perspective – on this epoch. On the one hand, stylised portraits of the medieval Grand Masters, the rulers of the Teutonic Order, bear witness to this attention. On the other hand, the monumental historical painting “The Battle of Grunwald” by Jan Matejko is displayed in a smaller reproduction.