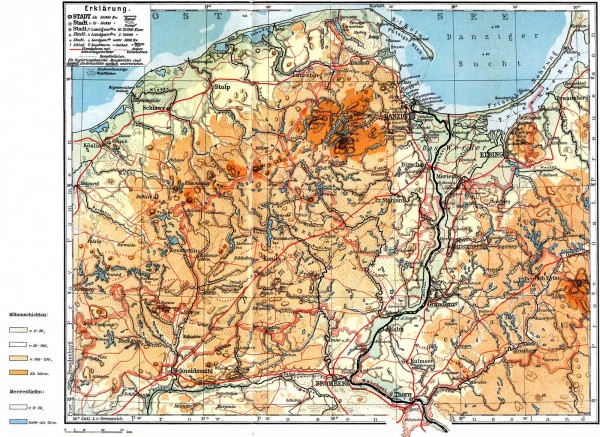 The historical region of West Prussia is located in the north of the Republic of Poland. Located approximately between 53 and 55 degrees of northern latitude, the region extends across both sides of the Vistula River, which so characteristically shapes the countryside, and effectively correlates to the geographical region between Bremen and Flensburg.

The Baltic Sea coastline forms a geographical boundary to the region to the north, which is largely defined by the almost semi-circular opening Gdańsk Bay. In the estuary delta between the Vistula and its eastern tributary, the Nogat, a lowland area that was reclaimed in the early modern period stretches across the three branches of the Vistula. Although this area lies partially below sea level, it is very productive land.

On the western side of the Vistula, the territory of Pomerelia, also referred to as Eastern Pomerania, lies to the north. As a part of the Baltic Ridge, the scenic Szwajcaria Kaszubska (literally: Kashubian Switzerland) spreads out here, with Wieżyca (German: Turmberg) the highest peak in the region at 329 metres above sea level. The Tuchola Forest, also known as the Tuchola Pinewoods, connects this region to the south, encompassing extensive forest areas, parts of which are protected.

Pomesania is located to the east of the Vistula, reaching to the Vistula Lagoon in the north, a part of the Baltic Sea that is almost completely separated from the open sea by a narrow peninsula, the Vistula Spit. Further to the south, Chełmno Land straddles the region with a landscape characterised by its hills and lakes.

To the present day, the region is primarily rural and sparsely populated. From the “Tri-City” of Gdańsk – Sopot – Gdynia on the coastline through to Toruń in the south, almost all of the larger cities are located on the Vistula and the Nogat (or the Elbląg River) or in the near vicinity. Gdańsk and Gdynia are two large seaports on the Bay of Gdańsk.