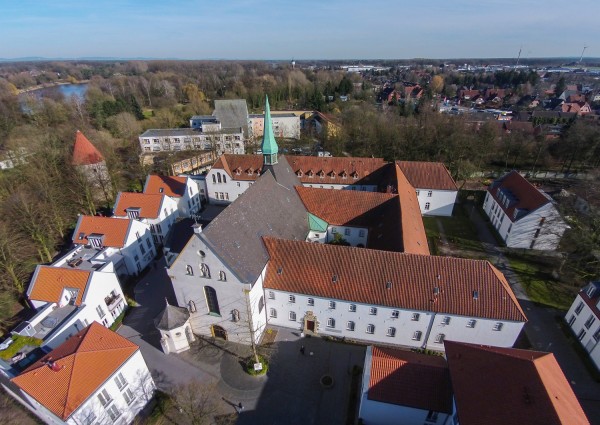 Since 2014, the Westpreußisches Landesmuseum has welcomed its visitors in the former Franciscan monastery in Warendorf. This historical complex is located on the eastern edge of the old town, with Klosterstrasse leading in a direct line from the market square, with its parish church of St Laurentius, to the entrance of the museum.
In the course of the Counter-Reformation – with the specific aim of once again propagating the Catholic belief in the area – Franciscans settled in Warendorf in 1628. They began to build their own church in 1652 and, on its completion in 1673, work commenced immediately on the monastery buildings, which were completed in 1683. The buildings were continuously inhabited by Franciscans from this time, even surviving during the post 1800 period of secularisation. It was only in 2008 that Franciscan occupation ceased and the monastery was closed.

The monastery’s three central wings are grouped around a courtyard, and now house the main rooms of the Westpreußisches Landesmuseum. The ground floor features the cloister, with large windows opening onto the courtyard, offering an excellent space to display prominent pieces from the collection. The former dining room (refectory) adjoins this area, providing a venue for the museum’s special exhibitions. The majority of the permanent collection is housed on the first floor. Former monastic cells serve as intimate exhibition spaces and clarify the chronological structure of the historical presentation.

A long transept is connected to the eastern wing, which is now being used as a living area. From an art-historical perspective, the portal to the forecourt on the monastery’s western side is particularly noteworthy. It is framed by pilasters and entablature and decorated with floral ornamentation. The coat of arms and inscription above the door refer to Prince-Bishop Ferdinand von Fürstenberg, who sponsored the building. The former monastery church is connected to the north. In its choir room, this church has a comprehensive range of features and furnishings from the late eighteenth century, and can be viewed as part of a museum visit.

The conversion of this historically listed monastery was undertaken in 2012/13 for the Westpreußisches Landesmuseum under the direction of the architectural firm Pfeifer – Ellermann – Preckel from Münster. The rooms were not significantly altered in their fundamental layout, and some key details reminiscent of monastery life were deliberately retained. A new residential area has been built in the immediate vicinity of the monastery, and the housing structures have been adapted to match the design and height of the monastery.